We are pleased to announce Rob will be inducted into the Iowa Blues Hall of Fame on Friday, February 12 2016. Other 2015 class inductees include Shaun Murphy, Jeff Petersen and Andre Mosqueda. The induction ceremony is held in conjunction with Central Iowa Blues Society’s Winter Blues Fest. More info about the Central Iowa Blues […] 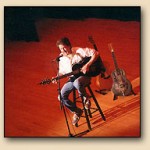 No shows scheduled at the moment... check back soon!