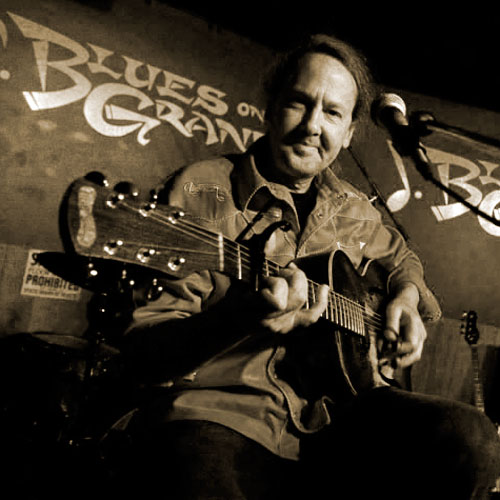 Rob received his musical education in the barrooms of Forest Avenue  in his home town of Des Moines, Iowa, sitting in with the likes of Rose Marie Webster, Sonny Terry and Brownie McGhee, and Luther Allison.

During the ’80s he barnstormed the midwest in The Wapsie River Band, then in 1990 went back to playing solo. Opening up for Lyle Lovett, The Band, John Hiatt, The Austin Lounge Lizards, Dr.John, Dan Hicks, Jerry Jeff Walker, Norman Blake, Steve Forbert, Leon Redbone, and dozens of Blues acts. This, coupled with a legendary weekly gig at Flanagan’s, lead to recording three cds on the Hot Fudge label and being a part of the trio Two Bobs and a Babe that included label-mates Bob Dorr and Molly Nova.

Blues/Folk based, he can cover Jazz or blues standards, or do a set of  his own tunes. His finger-picking style comes from listening to Blind Blake, Doc Watson,and the prewar Chicago Blues players. His slide playing is heavily influenced by Johnny Winter, Lowell George and Ry Cooder. For slide Rob uses his ’32 National Duolian. For most of the regular guitar work his ’35 Epiphone archtop, or ’54 Gibson Lg-2. His songwriting is influenced by Texas songwriters and is laced with self-deprecating humor. 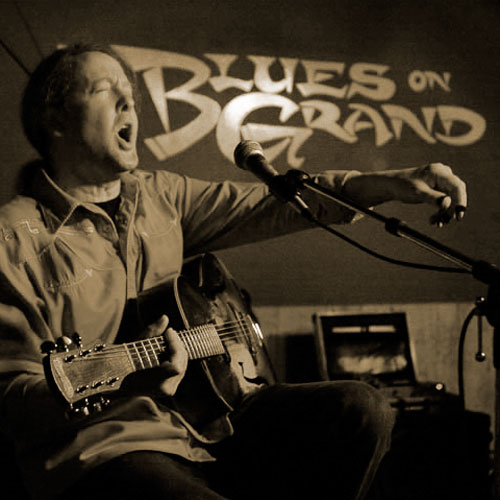 Playing festivals, bar rooms, churches and private parties from The Grand Canyon to Rabbit Hash, Kentucky, mostly as a solo act, he’s also played guitar for The CJC Big Band, The Party Gras Classic Jazz Band and The NOLA trad Jazz  band. Rob’s songs can be heard on KUNI, KFMG, and blues programs around the nation and Europe. His music has appeared in several Public Television projects, which have received EMMY, and other awards.